STANDING FIRM, a national program of the Women’s Center and Shelter of Greater Pittsburgh, in conjunction with Southwest PA Says No More, FISA Foundation, and United Way of Southwestern Pennsylvania, hosted the 8th annual CEO Breakfast; bringing together corporate and community leaders to discuss steps that can be taken to address domestic violence in the workplace.

Councilwoman Erika Strassburger, in partnership with the Pittsburgh Commission on Human Relations and STANDING FIRM, a national program of the Women’s Center and Shelter of Greater Pittsburgh, introduced a resolution focused on eliminating discrimination in the workplace against victims of domestic violence.

No Visible Bruises: What We Don’t Know about Domestic Violence Can Kill Us by Rachael Louise Snyder

We struggle with monsters.  We don’t believe that one human being can treat another so inhumanely.  We don’t want to think that these people exist in our society.  Rachael Louise Snyder knows monsters.  She has spent a career documenting war and violence around the world; tragedy after tragedy, and, through that process, has come to recognize monsters.

In No Visible Bruises, Snyder turns her attention to the violence in every one of our communities that is “so utterly hidden”, that many do not know it exists – Domestic Violence.  Snyder is up front about her reluctance to use that term to describe such brutality, but it is the term most understand and recognize.  The book is a clarion call for reform, not only in the systems that attempt to help victims escape and recover, but also in those that attempt to predict and reform the very perpetrators of violence.  The insight Snyder offers is powerful and soul-gripping.

Understanding the draw to the demon is the beginning of understanding domestic violence.  The secret is that they don’t start as demons.  The demon slips in, slowly, subtly at first and in full view only when the demon knows that its victim’s escape is next to impossible.  Through her expert portrayal of the life, and ultimate death, of Michelle Monson Mosure at the hands of her husband, Rocky, Snyder offers a thorough and gut-wrenching view into this kind of tragedy.  Snyder’s truth-telling dismantles the central myths of domestic violence; that if it was bad enough, the victim would leave and that violence in the home is a private matter.  She scoffs at the absurdity of asking “why does she stay?” instead asking “why is he violent?”.

Snyder describes the nearly invisible, erosion of self that the abuser demands from the victim and the process the victim goes through in first trying to take a stand, but ultimately acquiescing.  Through Mosure’s story, documented in home movies, Snyder caught the subtlety of this dangerous dance revealed in every hour of footage.  Her description of what she witnessed is intense and almost over-powering to the reader.

In the chapter “A Bear is Coming at You”, Snyder sheds light on one of the most profoundly misunderstood question in domestic violence court cases – “why does she recant?” .  The hard truth that many in the legal system have simply not understood is that victims recant when the violence is escalating because recanting is the only means she sees of survival.  The abuser has often beaten the system at least once and uses that fact to further trap the victim.  When finally arrested for assault, the abuser can often post bail within hours and be released right back to the home, rage intact.  Victims see recanting and showing loyalty to the abuser as the only means of survival – “please don’t kill me when the cops leave”.

“Love is what makes domestic violence different from any other crime.”  Snyder explains, and she shows the role love and its distortion, plays from the perspective of the abuser and the victim. Snyder is able to deftly offer insight into the minds of the victims, the perpetrators, their families and those in the system surrounding the issue.  She also explores the issue of narcissism in the personality fabric of the batterer explaining the dissonance many describe, that the batterer is often more likeable than his victim and abuses because “he loves her”.

This book tells the true story of Michelle Monson Mosure, who was 23 years old at the time of her death in 2001. Her husband Rocky shot and killed Michelle and their two children before turning the gun on himself.  Her story, culled from countless hours spent interviewing family and friends of the couple, tells the tragically iconic description of the descent into intimate partner violence Michelle endured at the hands of Rocky.   Through interviews with domestic violence survivors across the country, reviewing court records and case evidence and horrific details of abuse described by victims too endangered to be identified, Snyder helps us understand the full story of intimate partner violence in our society

Snyder writes of the personal impact her research has had on her.  Her ability to be open in this manner heightens her credentials and gives the reader a deeper understanding of the issue and one’s own emotional responses.  This brave author immersed herself into the lives of these victims in order to tell their stories and help us all see what we cannot or do not see in our own community.

As captivating as fiction, this book is sadly a work of non-fiction. This should be required reading for anyone involved in family crises intervention, health care or human services.  Most importantly, its illumination of intimate partner violence doesn’t end with describing the problem.  It offers strategies for reform that should be embraced and enacted if we are to stop the monsters.

By conducting fatality reviews with judges, police, victim advocates, probation officers, attorneys, social workers, doctors, nurses, family members and others involved in domestic violence crisis, communities across the country are identifying the gaps in the system and communication breakdowns that have failed so many victims.  Snyder showcases examples where changes to the practice of information sharing, bail reform, legal reform, enacting a “duty to warn” and dangerousness hearings have disrupted the cycle of violence and saved lives.

Reviewer:  Janet Berkhouse has served on the Advisory Council of STANDING FIRM from its inception.  She resides in North Huntingdon, PA with her husband Chuck and her two children, Adam and Zaki.  Janet has over 25 years of professional experience in Organizational Development, Talent Management, Information Technology, and Human Resources.

Get information about STANDING FIRM and the news in the southwestern Pennsylvania region.

Click on these links to find news items about STANDING FIRM:

The 350 attendees who filled the room on Wednesday at the Omni William Penn, Downtown, were riveted by speaker Susan Still’s story of many years of abuse by her husband and her employer’s actions to help her to safety.

The Workplace and Domestic Violence in Focus

Domestic Violence is commonly used to describe abusive acts by people against their spouses or significant others. But the term can be misleading because those acts can take place outside the home too, said Susan Nitzberg, associate director of STANDING FIRM

Partner Violence: We All Need To Pay Attention

As the separation of work and life becomes even more blurred—fueled by ubiquitous access, continuous optimization and wider responsibilities—ensuring the safety of employees becomes even more imperative. While safety is often focused on the workplace itself (keeping people free from accidents, hostile situations, and safety code, etc.) we now realize that the impact of each employee’s personal safety outside of work has significant impact on company morale and productivity.

Lynette Lederman of Squirrel Hill was named winner of the STANDING FIRM Community Champion Award. Ms. Lederman, who has been working for the City of Pittsburgh for over 10 years, covers issues within Squirrel Hill and other Jewish communities.

Standing Up Together: KDKA anchor Susan Koeppen emceed the event and New York Times bestselling author Leslie Morgan Steiner shared her story of abuse and survival and the importance of a workplace that is aware and prepared to deal with issues of partner violence.

The Village of Sewickley took action in learning how to recognize and respond to domestic violence, particularly as it affects the workplace. STANDING FIRM staff members, Susan Nitzberg and Barbara Penner, in conjunction with the Sewickley Valley Chamber of Commerce trained businesses what to say and what to do when faced with a domestic violence issue at work.

SF Associate Director, Outreach, Susan Nitzberg, with Rob Conroy (CeaseFirePA), and exhibit director Kate Lydon, were interviewed for the Saturday Light Brigade Radio show. The exhibit was a vehicle to call attention to the various forms of violence and its impact on our society.

Listen to the Podcast

by Patricia Cluss | Pittsburgh Post-Gazette, Letters to the Editor | December 22, 2011

Gainful employment may help in recovery from domestic abuse

Dr. Cluss speaks at the public launch of SF at the PHRA conference in September. 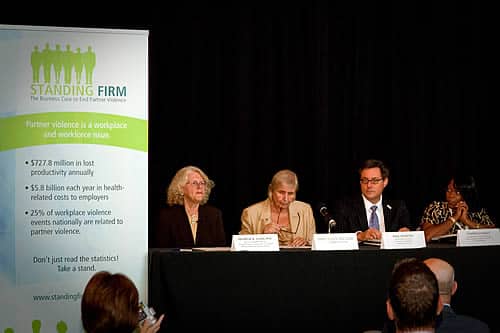 STANDING FIRM Focuses on Partner Violence in the Workplace

Letters to the Editor – Firing Haywood was the correct decision

STANDING FIRM resources are highlighted in a letter to the editor about Pitt coach’s firing.

Read the Letter to the Editor

This article was submitted by Patricia Cluss, director of STANDING FIRM; Judy Hill-Finegan, director of the Personnel & Civil Service Commission for the city of Pittsburgh; and Greg Peaslee, senior vice president of human resources for UPMC.

An article from January 28, 2010, describing the City of Pittsburgh’s efforts to pass a domestic violence ordinance for all employees. STANDING FIRM Director, Dr. Patricia Cluss, describes the initiative.