STANDING FIRM was involved as a large regional employer developed their partner violence plan a number of years ago. Several months after employee trainings were completed, a supervisor approached the Director of Personnel and thanked her for providing the training for managers and supervisors. She reported that an employee had revealed that recent absences were due to the employee’s violent relationship with her husband.

The supervisor stated, “I was so proud of myself. I knew exactly what to do! I gave the employee the number for the shelter and talked to her about ways our department could make things easier for her. Thanks so much for providing this training. It really helped me do my job!”

Several months later, the director of a local women’s shelter told STANDING FIRM staff that their hotline had received a call from a woman identifying herself as an employee of the organization that had provided the trainings. The employee said: “My supervisor at work was so helpful. I told her I was in trouble and she knew exactly what to do. She gave me the hotline number and suggested I call.”

The shelter noted that there had been 5 similar hotline calls in the previous 7 months, reinforcing the impact of the organization’s training efforts on victims and supervisors employed there.

Committed to offering employees a safe & healthy place to work.

At a presentation at a Pittsburgh Human Resources Association conference, an attendee approached SF staff to explain that she had previously, as an HR director, failed to understand the importance of understanding partner violence as a workplace issue.

She said she had spent many hours over the previous several months working with a group of employees dealing with a coworker who admitted to being abused by her partner, but who was unwilling to seek help from HR or the company’s Employee Assistance Program. The HR director felt that her company lacked the skills to proceed further.

Shortly after this conversation, the HR director requested a 30-minute phone consultation that resulted in her revising the company’s workplace violence policy. Procedures were developed to aid employees who self-identified as victims and to make it clear to perpetrators that misuse of company resources to harass or harm others would not be tolerated.

SF provided two trainings, one for management and supervisors and the second for staff. During the latter presentation, the company President told his employees that the reason their company joined STANDING FIRM was not just because of the effect of partner violence on productivity or the liability issues mentioned during the training, but because he and the company are committed to offering their employees a safe and healthy place to work.

At the conclusion of both trainings, the SF trainer was approached by an employee who thanked her for talking about partner violence, as the woman had been a long-time victim, was now free from her abuser, and had never felt comfortable sharing that information with anyone at the company.

“It is clearly the right thing to do.”

Human Resources training at a large, international manufacturing company: “All of us at [company name] were bowled over by the training. Beautifully done and powerful message. STANDING FIRM’s work shows the very real economic impact partner violence has on companies. They provide practical advice to coworkers, supervisors, executive leaders, and subordinates about actions to take if they suspect a colleague is either a victim or a perpetrator of partner violence. STANDING FIRM’s work shows that partner violence is systemic in society and not only is it important to address the issue to promote the company’s future success, it is clearly ‘the right thing to do’.”

“Create a work culture built around the safety and well-being of its community.”

Regional arts organization: “Through our partnership with STANDING FIRM, we have taken the initiative in launching both a Workplace Violence Prevention Policy and an Anti-Bullying Policy. Just recently, we have completed training for our in-house threat assessment team to assist in the management of reported at-risk incidents or behavior in the workplace. We are partnering with the Resolve Crisis Network to offer additional forms of resource support to those in need and to serve as an outside clinical partner in our case management process for reported incidents. We started our in-house workplace violence prevention training for our staff, supervisors, and members of our shared services division. We have launched an internal workplace education campaign in our employee areas utilizing STANDING FIRM workplace partner violence awareness materials, and routinely discuss the impact of violence on the workplace in our All-Staff meetings. This work is just an example of the steps that other organizations can take to create a work culture built around the safety and well-being of its community.”

“Our organization is educated and prepared to handle partner violence situations…”

A large, well-known human services agency: The VP for Human Resources told us: “Upon the advice of our CEO, our Board of Directors approved a policy on addressing partner violence that was based on STANDING FIRM’s PV policy template. It was and continues to be communicated to all managers and supervisors and is uniformly disseminated to new hires upon orientation. When this information is provided to new hires, there are always many heads nodding in affirmation that this is an important resource for them or for anyone in their circle of family and friends. New resource posters are frequently distributed at Manager/Director meetings to be utilized in our various locations. To my knowledge, we have not had any recent incidents to share. Basically, we follow all SF’s advice. With the vital support of our Board of Directors and CEO, I feel our organization is educated and prepared to handle partner violence situations that might present themselves at any moment.”

The message from these stories and others is that companies are eager to improve their approach to partner violence and perceive strong benefit from SF resources and staff.

Learn how our champions are standing up to put an end to partner violence in the workplace.

Stand Up with STANDING FIRM

“When we initially signed up for membership in STANDING FIRM, I was supportive of the cause. However, when I heard Dr. Cluss speak at the Pittsburgh Human Resources Association Professional Conference I realized the serious impact partner violence has in the workplace. The information she presented was so compelling and it helped me realize that we most likely had this “unknown problem” in our workplace. When I brought the information back to management team, I received 100% support to move forward with some action steps.”

“Having been educated by STANDING FIRM has been not only a reinforcement of our core values but also enlightening to our staff. The information presented to us assisted us in the ability to identify partner violence as well as providing us with valuable responses to partner violence situations. Often we feel that we are responding compassionately and properly to a partner violence situation when in fact we could be doing more harm than good. STANDING FIRM educated us on some of our misconceptions as well as provided us with direction for resources and policy creation.”

“I understood that partner violence is a wrong that cannot be tolerated. STANDING FIRM, however, brought a new perspective about the effect for both victim and perpetrator in the workplace that resonated with us…that disruption not only had a human value outside the workplace, but also caused significant losses in productivity and morale in the workplace itself is a unique way to attach the problem that allowed us to bring greater awareness to this issue at the Post-Gazette.”

“The feedback from our leadership team today has been overwhelmingly positive. You have already increased our awareness and sensitivity relative to partner violence, and you have helped us to understand the critical role we as employers play in this regard… We’re proud and pleased to be affiliated with SF, and feel very fortunate to be working with you.”

“Hi Barb, I wanted you to know that 2 participants in the training on Thursday came to me later to say that they had once been victims of domestic violence & they thought it was wonderful that we had joined STANDING FIRM. Both thought that you presenting to staff would be the way to roll out this program. Thanks!” 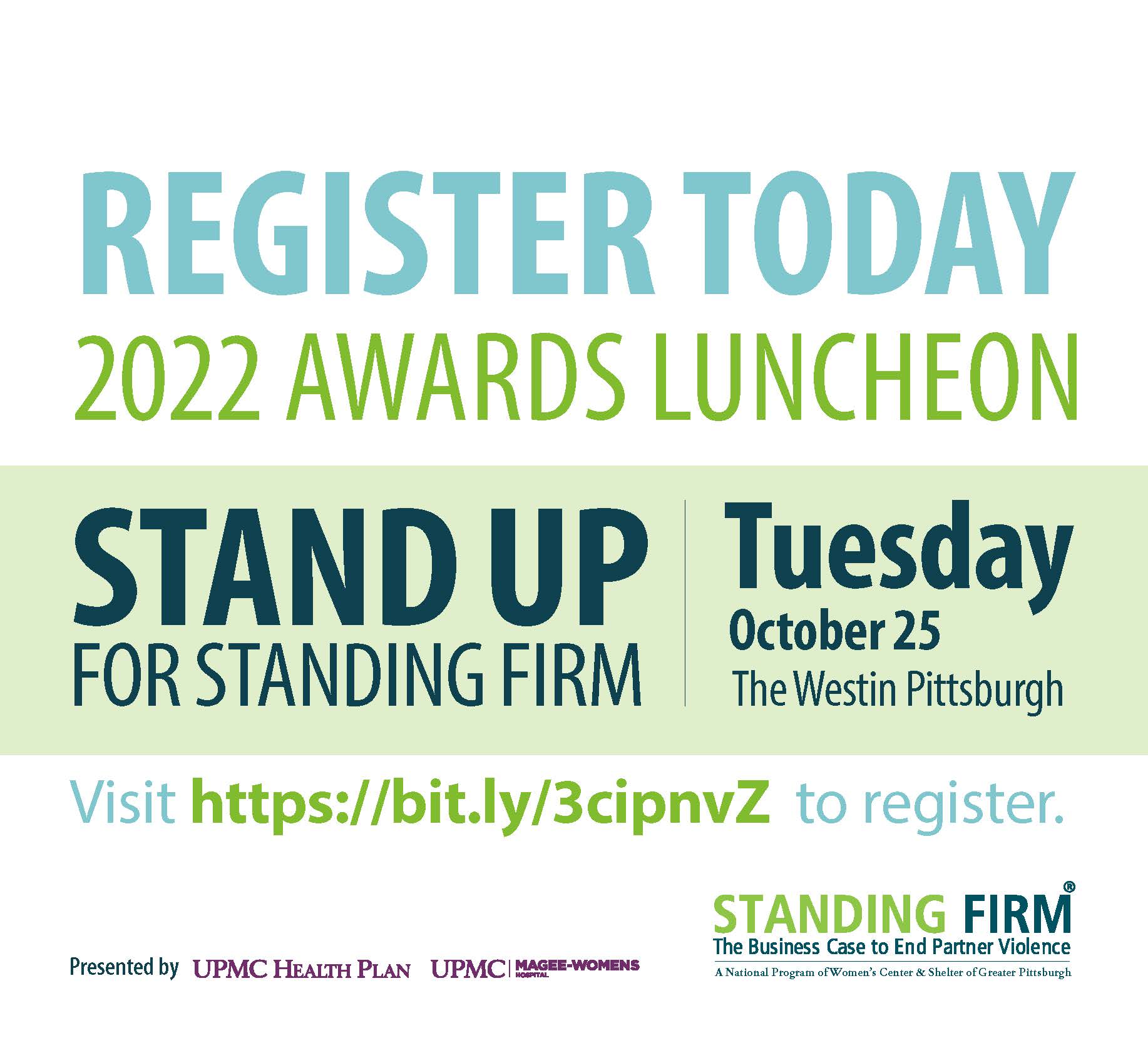